Hephaestus, the ugly and ill-tempered Smith-god, was so weakly at birth that his disgusted mother, Hera, dropped him from the height of Olympus, to rid herself of the embarrassment…

Well, right there you can see where the Spartans might have got their notions of throwing sickly newborns off the cliffs of Taygetus. But as regards Hephaestus, god of fire and the blacksmith of the gods of Mt Olympus, in this first fall he was lucky: he fell into the sea, where he was found by the nymph Thetys, who duly took him home. A few years later, Hephaestus repaid the kindness by setting up a little undersea smithy and making for her some useful household odds and ends, not to mention some fancy jewellery which caught the eye of Hera. Owing to which not only he was allowed to return to Olympus but was given Aphrodite for his wife. All’s well that ends well, or would have, except that he then said some unwise words to Zeus, who once again hurled him off the mountain… This time he was less lucky, because he fell on hard ground and remained lame for the rest of his immortal life.

Fast forward to Roman times. As we know, the Romans were quite ingenious when it came to engineering (my personal favourite is the corvus, a bridge for boarding Carthaginian galleys, the classic solution to the conundrum of how-to-turn-a-naval-battle-at-which-we’re-****-into-a-land-battle-at-which-we’re-so-much-better), not to mention their various other achievements that clamour for attention. Despite of this, the Romans seemed sadly lacking in imagination when it came to their religion: so much so that they didn’t bother to come up with their own – they merely imported in the Ancient Greek one. And so Hephaestus the Greek became Vulcan, the citizen of Rome. Long live the gods, under one name or another.

Now it so happened that when Hephaestus returned to Hera’s favour, owing to his ability to make fancy jewellery, he abandoned his undersea workshop and set up a new smithy on Mt Olympus. Or at least so says the original myth but myths are subject to change… and Hephaestus is reputed to have forges in more than one place.

The Greeks settlers on Sicily have already noted the place, but ultimately we probably owe the location of Vulcan’s forge to the incoming Romans who have hit on just the spot: a little volcanic island off the shores of Sicily, conveniently named…

To be more truthful, the little island wasn’t ‘conveniently’ named Vulcano to begin with. It’s more likely to be exactly the other way round: that it got named after the god whose forge it was believed to hide. And of course, half of Europe then adopted the word in various spelling variations to signify volcano: Vulcano is the spot where mythology, geology and linguistics fused together among rising wisps of acrid fumes.

“…there are many other mountains all over the earth that are on fire, and yet we should never be done with it if we assigned to them giants and gods like Hephaestus”.

Tiny Vulcano (along with the better known Stromboli) is one of the eight Aeolian islands, a group of islands about 20-30 km north of Sicily in the Tyrrhenian Sea.  There’s in fact nothing much more to Vulcano than the crater of a dormant volcano – so classically shaped that it matches the illustration volcano of my old grammar school geography textbook line by line – complete with an overpowering rotten egg smell.

First of all, the rotten egg smell is only really bad at the harbour which is next to some sulphurous mud baths (for a few paltry euros you can go and roll in the radioactive mud if you like). Once you start to climb – because you can climb up to the crater and many school trips do – the fresh sea breeze blows it away. It’s a climb worth making and it’s easy enough even for young children, elderly grandmas or convalescents. Nor do you have to join a guided tour like on Stromboli; you can arrive in a timetabled ferry and leg it yourself following your nose. On the way up you can enjoy the stupendous views of the rest of the Aeolian Islands, while once on top you’ll be rewarded with the view of the crater of a classic school book volcano, ringed with seismographic equipment. Which, by the way, are not there merely to decorate the skyline: Vulcano last erupted in the 19th century and is expected to do so again. (If you speak fluent enough Italian, you can have a chat with the scientists keeping an eye on the instruments.) You will see the sulphur deposits on the rocks and the smoke rising from the fissures, and feel the heat of the rock beneath your feet. And after you come down the hill, you can take a dip in the sea – in places the water bubbles like in a jacuzzi. 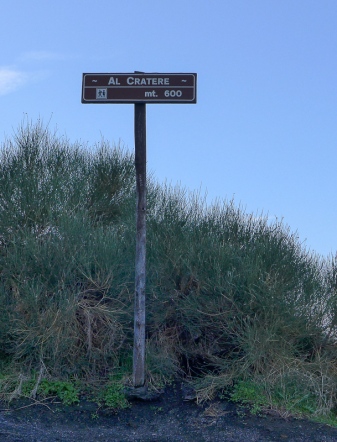 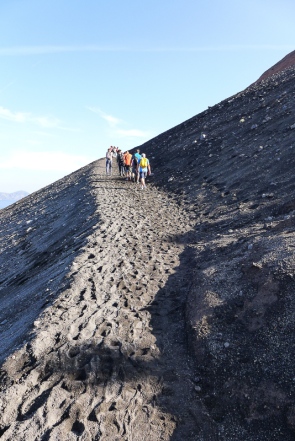 On the way to the crater

View from halfway up

Smoke rising from the crater

The Great Crater of Vulcano

Vulcano – the place where Hephaestus forged the shield of Achilles…

This said, he left her there, and forth did to his bellows go,
Appos’d them to the fire again, commanding them to blow.
Through twenty holes made to his hearth at once blew twenty pair,
That fir’d his coals, sometimes with soft, sometimes with vehement, air,
As he will’d, and his work requir’d. Amids the flame he cast
Tin, silver, precious gold, and brass; and in a stock he plac’d
A mighty anvil; his right hand a weighty hammer held,
His left his tongs. And first he forg’d a strong and spacious shield
Adorn’d with twenty sev’ral hues; about whose verge he beat
A ring, three-fold and radiant, and on the back he set
A silver handle; five-fold were the equal lines he drew
About the whole circumference, in which his hand did shew
(Directed with a knowing mind) a rare variety;
For in it he presented Earth; in it the Sea and Sky;
In it the never-wearied Sun, the Moon exactly round,
And all those Stars with which the brows of ample heav’n are crown’d,
Orion, all the Pleiades, and those sev’n Atlas got,
The close-beam’d Hyades, the Bear, surnam’d the Chariot,
That turns about heav’n’s axle-tree, holds ope a constant eye
Upon Orion, and, of all the cressets in the sky…

…All done, he all to Thetis brought, and held all up to her.
She took them all, and like t’ the hawk, surnam’d the osspringer,
From Vulcan to her mighty son, with that so glorious show,
Stoop’d from the steep Olympian hill, hid in eternal snow.

Vulcan forges armour for Achilles,
from The Iliad by Homer
(Transl. by George Chapman)