The only photo I remember from my primary school history book is this:

I’m sure you’ve all seen it before: St Paul’s dome standing intact above the ruins, surrounded by smoke and flames, seemingly indestructible, converting into a symbol. Iconic doesn’t even begin to describe it. It was taken on 29 December 1940, the 114th night of the Blitz, by Herbert Mason, a Daily Mail photographer, from on top of the Daily Mail building in Fleet Street. I take my hat off to Mr Mason – quite apart from any other considerations, just for having the guts to stand on an exposed London rooftop during a German bombing raid, taking pictures.

St Paul’s x 71: Or How to Fail to Take a Good Photo of an Iconic Building

I went down to St Paul’s yesterday. Week 2 of the photo challenge called for a landscape and as a trip out of town didn’t appeal, I opted for an urban landscape: I had in mind the view of St Paul’s across the Thames.

After some exploration, I hit on the ideal spot from where to take the picture. Unfortunately a young bloke just beat me to it. I thought I’d wait but he had two cameras (with big enough lenses to make the rest of us feel small) and he wore an arty neck-kerchief. At some point when he moved sideways, I stepped in to take my chance, and immediately he moved back, elbowing me out of the way. He was still occupying the prime spot ten minutes later. I had to settle for a different spot:

The landscape out of the way, I experimented with some angles and reflections. I tried to tell the story of the firefighters who protected St Paul’s: twelve of them died that night when Mr Mason took his iconic picture. I caught a Routemaster passing in front of St Paul’s. In total I took 71 photos of St Paul’s yesterday (thank god for digital cameras) – none of them are anything to write home about. 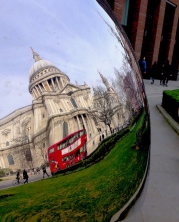