For today’s Mediterranean theme, we’ll take a painter. From a Mediterranean country, clearly. He’s a painter I cannot be indifferent to: I either hate his pictures – or love them.

Michelangelo Merisi da Caravaggio was an Italian painter who lived from 1571 to 1610.

He was famous for his realistic style, his use of light and his remarkable narrative power.

Jesus reveals himself to his disciples

There was art before him and art after him, and they were not the same.

He was also (in)famous for his private life: he was a hero of bar fights, who was accused of keeping a male lover and who killed a man in a dispute over a woman.

Arrogant, rebellious and a murderer, Caravaggio’s short and tempestuous life matched the drama of his works.

…after a fortnight’s work he will swagger about for a month or two with a sword at his side and a servant following him, from one ball-court to the next, ever ready to engage in a fight or an argument, so that it is most awkward to get along with him.

I love him for 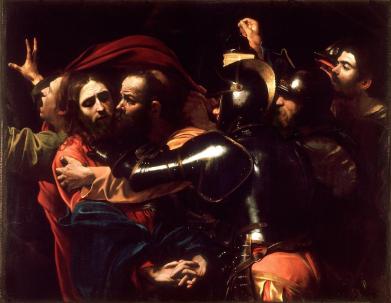 The Taking of Christ 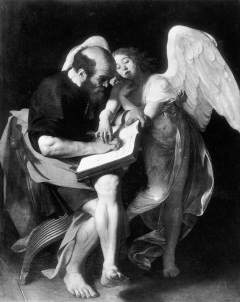 St Matthew and the Angel 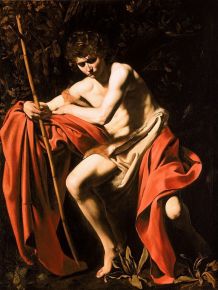 St John the Baptist in the Wilderness 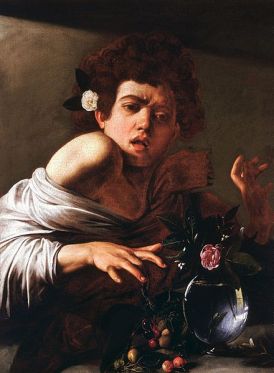 Boy Bitten by a Lizard

Boy with a Basket of Fruit

All works, no matter what or by whom painted, are nothing but bagatelles and childish trifles… unless they are made and painted from life, and there can be nothing… better than to follow nature.

St Matthew and the Angel vs The Inspiration of St Matthew

Caravaggio caused a scandal with his painting of St Matthew for the altar of a church in Rome. E. H. Gombrich told what happened in his book, The Story of Art:

Caravaggio, who was a highly imaginative, uncompromising young artist, thought hard about what it must have been like when an elderly, poor, working man, a simple publican, suddenly had to sit down to write a book. And so he painted a picture of St Matthew with a bald head and bare, dusty feet, awkwardly gripping the huge volume, anxiously wrinkling his brow under the unaccustomed strain of writing. By his side he painted a youthful angel, who seems just to have arrived from on high, and who gently guides the labourer’s hand as a teacher may do to a child.

When Caravaggio delivered his picture to the church where it was to be placed on the altar, people were scandalised at what they took to be a lack of respect for the saint. The painting was not accepted, and Caravaggio had to try again.

The Inspiration of St Matthew is a good picture – of the kind that you can see by the thousands all over Europe in Catholic churches and in art galleries. Eminently forgettable. St Matthew and the Angel on the other hand is one of a kind: innovative, moving, powerful, cathartic. (Sadly, only black & white reproductions of it survive: it was destroyed in World War II.)

Was there ever a clearer case made for artistic freedom?

11 thoughts on “My Love-Hate Relationship with Caravaggio”