Miss Britain III was a single-engine speedboat built by Hubert Scott-Payne, an aristocratic boat designer in 1933. Although it was then narrowly beaten in a race on the St Clair River in Michigan by Miss America X, a boat powered by four engines, later that year Miss Britain III broke the speed record for a single-engine motorboat with Scott-Payne and team-mate Gordon Thomas becoming the first men to travel over 100 miles per hour in a single-engined boat – a record that remained unbeaten for 50 years.

Scott-Payne presented Miss Britain III to the Maritime Museum in Greenwich in 1951 where it’s currently on display.

I was pleased with the photo when I took it but when I saw it on the computer screen for the first time, the boat seemed rather unremarkable against the clutter of the background, especially when turned into black & white. It’s a boat that deserves better so cue a lot of experimenting in the computer: I can no longer tell you how exactly I achieved this result (a noir filter and fiddling with the contrast was involved at some point as was cropping the glass ceiling out). The end result is rather dramatic with the background practically black and the sunlight and shadows of the ceiling’s pattern showing on the top of the boat.

For comparison, here’s my other photo -from a slightly different angle – without the filter, etc.: 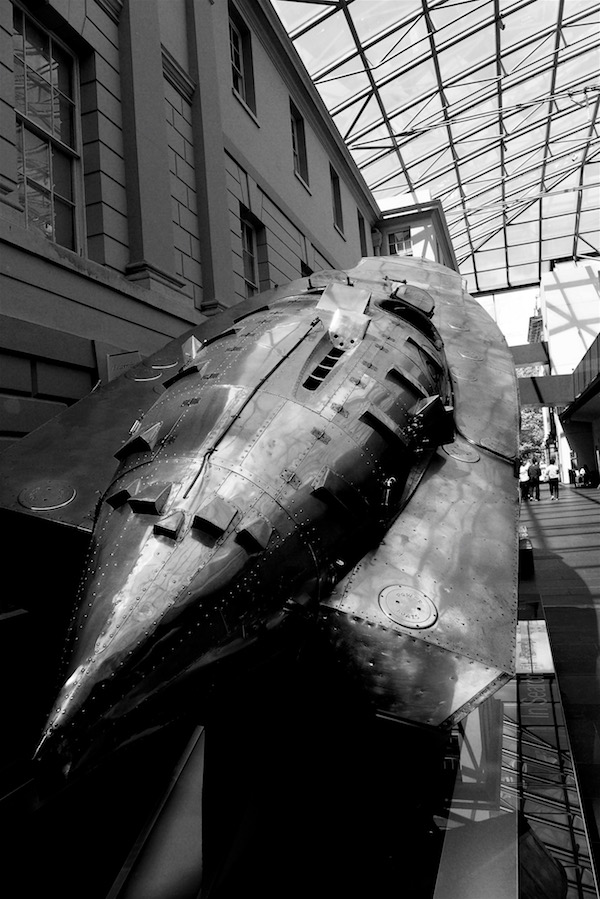 I feel the first photo has a certain je-ne-sais-quoi. The second just seems like a photo of a metal boat – a bit boring perhaps. Which one do you prefer?